An introduction to resources about anti-racism and racism.

"Whiteness itself refers to the specific dimensions of racism that serve to elevate white people over people of color. This definition counters the dominant representation of racism in mainstream education as isolated in discrete behaviors that some individuals may or may not demonstrate, and goes beyond naming specific privileges (McIntosh, 1988). Whites are theorized as actively shaped, affected, defined, and elevated through their racialization and the individual and collective consciousness’ formed within it (Whiteness is thus conceptualized as a constellation of processes and practices rather than as a discrete entity (i.e. skin color alone). Whiteness is dynamic, relational, and operating at all times and on myriad levels. These processes and practices include basic rights, values, beliefs, perspectives and experiences purported to be commonly shared by all but which are actually only consistently afforded to white people" (Racial Equity Tools).

White privilege "[r]efers to the unquestioned and unearned set of advantages, entitlements, benefits and choices bestowed on people solely because they are white. Generally white people who experience such privilege do so without being conscious of it" (Racial Equity Tools).

"Per Robin DiAngelo, white fragility is 'a state in which even a minimum amount of racial stress becomes intolerable [for white people], triggering a range of defensive moves. These moves include the outward display of emotions such as anger, fear, and guilt, and behaviors such as argumentation, silence, and leaving the stress-inducing situation. These behaviors, in turn, function to reinstate white racial equilibrium'" (Racial Equity Tools). 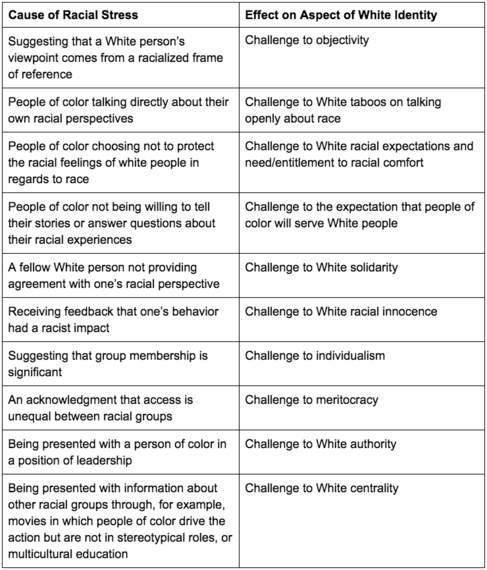 Racial stress list from "The Sugarcoated Language of White Fragility"

"Dr. Robin DiAngelo is the author of "What Does it Mean to Be White? Developing White Racial Literacy" and has been an anti-racist educator, and has heard justifications of racism by white men and women in her workshops for over two decades. This justification, which she calls “white fragility,” is a state in which even a minimum amount of racial stress becomes intolerable, triggering a range of defensive moves. These moves include outward display of emotions such as anger, fear, and guilt, and behaviors such as argumentation, silence, and leaving the stress-inducing situation" (General Commission on Religion and Race of the UMC, 22:05).